Saturday morning rolls around, still buzzing from the Knicks game we get up early and head out. One thing I never mentioned in my last blog was one of my greatest accomplishments in my life to date. In the morning, I woke up, rubbed my eyes and rolled over to see Alison awake. I asked her what the time was and she gave the usual response of, “guess?” I looked at the ceiling and said “seven fifty-six”. Alison tapped her fit bit and it read…7:56am. You have no idea how much joy that brought me. Anyways, back to Saturday morning. The plan for the day was to head down to Bowery for lunch and spend some time in Brooklyn. We started by heading along to Lexington Avenue to take the long walk down to Bowery and we were greeted by the setting up of a food and drinks market. I needed a photo eh…

We walked down 40 blocks and walked into a hipster looking lunch spot called ‘Freemans’, another place Alison had found online. It was very popular, therefore we put our names on the waiting list and checked out some of the local shops. So much cool street art here too.

We went into the ‘Octobers Very Own’ (OVO – Drake’s new shop), it was pretty cool, made some nice stuff, however as in Scotland money does not grown on trees over this side of the pond either. I left empty handed. Around half an hour later we headed back and had a sit in the sun outside. It was great to feel the warm sun on my face again. The weather over here is very up and down and I have seen very little sun, so it was nice just to chill for a bit.

For lunch/brunch I had eggs, toast, beer and Alison had some granola…very healthy. The place was very nice, you know the kind of spot…wood around the bar that hasn’t been treated properly, dark green paint on the walls, old wooden chairs that aren’t comfy, deer and stag heads on the wall and an overpriced bill. Never the less it was great food. Next up was the walk over to Brooklyn. Last time we were here we did the Brooklyn bridge, took some photos and spend some time in Brooklyn Heights and Cobble Hill area. This time I wanted to see Williamsburg. We headed out of Bowery and over the Williamsburg bridge. Alison had told me of all the cool places to see, eat and drink so I thought this would be a good way to spend our sunny Saturday afternoon. Williamsburg is a small area in Brooklyn that has become very popular in the last five years due to its growing industries and proximity to the city. If you ever need an example of what urban gentrification looks like, go there. We had a look in an estate agents window and you could rent a one bedroom flat in the area for $3,700 per month (£2960) and it wasn’t looking to nice. Sore one!

After a wonder through the streets that were littered with cafés, craft beer bars and independent clothing boutiques we made it down to the Brooklyn Lager brewery. It felt good to get a few beers in at the bowling alley that was attached to the brewery, crazy I know. On the Saturday in Aberdeen, back home, it was the Brewdog AGM and I was gutted to be missing it after an absolute screamer last year with Steveo, Davey B and Sunniva. Next year team, next year! After sinking some beers and hitting Joe’s Famous Pizzeria on the way back we headed over the bridge, got a beer and a cocktail in bowery and travelled home! After getting home to see Alison’s fit bit step count at 32,000 we crashed out. What a great day!

Sunday morning! Our last day together, due to this we decided to skip the morning church service…just like we have every Sunday ever since we have met and long before that. We decided to have a more relaxed day and enjoy the sun. By now it was pushing 24c. Boiling for our Scottish skin, I’m surprised Alison didn’t burst into flames. We grabbed our regular morning Starbucks and walked down 9th Avenue to the Chelsea highline. We stopped for a bit to bask in the sun and do some people watching and then we were off to get some world famous tacos. Mabel, my Mexican amigo, had told me to make sure I go to this specific taco joint as it is the closest thing I will get to have authentic Tacos, similar to the ones she gets in her native Tijuana.

I stood in the queue, that was huge for twelve o’clock, but this did make Alison feel better as in her mind if some place is busy then you are less likely to get food poisoning. Logic 101. I ordered four tacos and two glass bottles of orange and pineapple (weird) Fanta and we grabbed a seat to enjoy. I must say they were excellent, both myself and the wife in agreement! I know can sympathise with all the complaining Mabel does about American ‘Tacos’. I will never be the same again. Munch done, we were off to head to central park! On the way, we stopped in at the New York city public library, a beautiful building filled with so much history and culture. It’s also where Carrie almost gets married to Big in the Sex and the City movie…ah culture, drink it in! 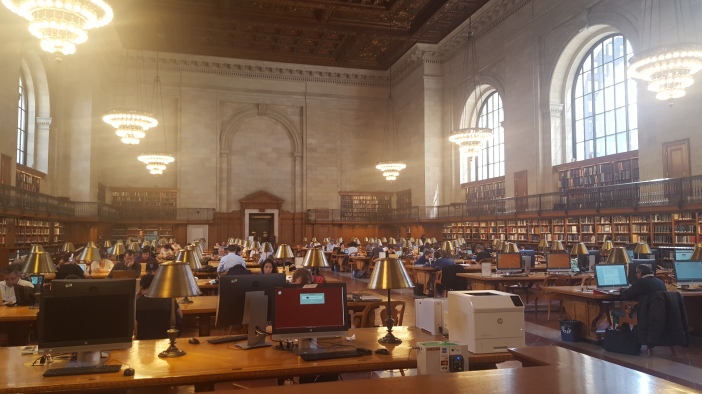 By this point the sun is out big time! I can feel the burn and I love it!

We grabbed a Starbucks near the park and headed in to have a seat in the sun. We lay and enjoyed watching all the kids run around without a care in the world and their parents chase after them. We then took a walk to areas of the park we missed last time and ran into a roller disco. It looked like a lot of fun, if only I had my skates. Il need to borrow some from my friend Lisa at work, she is the captain of the Edinburgh Roller Derby team, I thought of you Lisa when we saw this. The kind of thing you would be all over! The park looked beautiful. A great way to finish off the weekend with Alison!

Around six o’clock we decided to go back to the hotel room and chill for a bit before grabbing some dinner. I was happy to see when I got in that the Masters final round was coming up the 15th hole. Over the next hour or so I drank red wine, munched pringles and was able to celebrate Sergio Garcia winning his first ever major. I was so happy for him as he is one of the big reasons that I played golf start with. My brother and I stayed up one night to watch Garcia chase a young Tiger woods all the way to the death in the 1999 USPGA championship. A true legend now and a gentleman to go along with it! Golf done, we headed down to Pizza suprema, another dark and dingy pizza spot that served up unbelievably tasty and cheap slices. Hand in hand we headed home through the busy New York night to our hotel.

The usual drilled followed the next morning, after packing our stuff, we headed to Starbucks and sat in central Park enjoying our last hour together. We had a little stroll and returned to check out our room. We hopped in a hotel car and sat in horrendous traffic out of Manhattan to Kennedy airport. I felt bad as my flight was at 15.30 and Alison’s flight wasn’t until 19.00 but we agreed to go out at the same time to keep costs low. I didn’t feel bad when American Airline, true to form, delayed my flight until 17.15. Nice! Especially when I was getting off the plane and heading straight to PNC park in Pittsburgh to see the Pirates baseball game. I took the educated decision that most would do and headed to the airport bar as Alison and I were now both through security in different terminals. I am not one to complain, however, I will have been on 13 flights by the time I head home to Edinburgh and 5 of them have been with American Airline. Four of them were delayed, I missed one due to the other be delayed and I have been given a refund on baggage that they mucked up. The service is horrendous. If you have seen the recent United airlines fiasco, ripping people out of their seats on overbooked flights then it’s safe to say that, American Aviation, you need to get a grip. Three beers later, after watching a rare Yankees win, I was on the plane and headed to Pittsburgh.

I landed in, grabbed my bag and jumped in an Uber. My Uber driver was quality. Young Jeffery and I had a chat about everything Pittsburgh and before I knew it I was at the stadium. It was good to catch up with Tim again, after all the International Students had spent the weekend in Washington D.C. at the cherry blossom festival. Tim filled me in on the gossip and we tanned cans of decent beer. Due to the horrendous performance on the field we jumped in our designated drivers can and we were back in Slippery Rock before midnight. 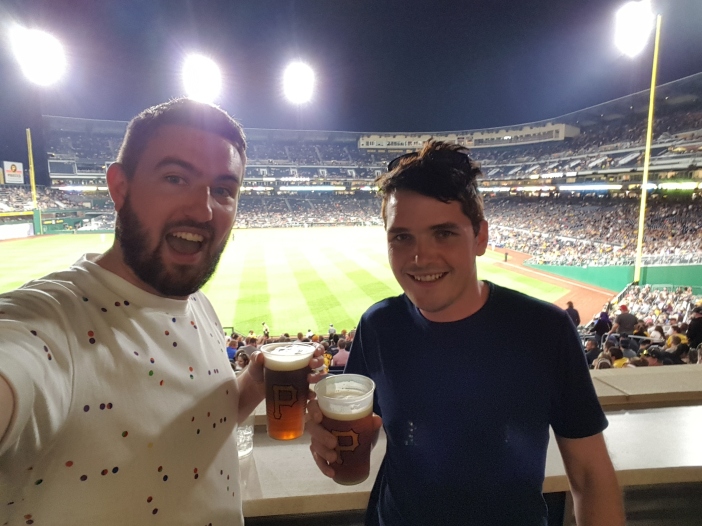 A great weekend seeing Alison and four weeks until I am home. I am really starting to look forward to that! 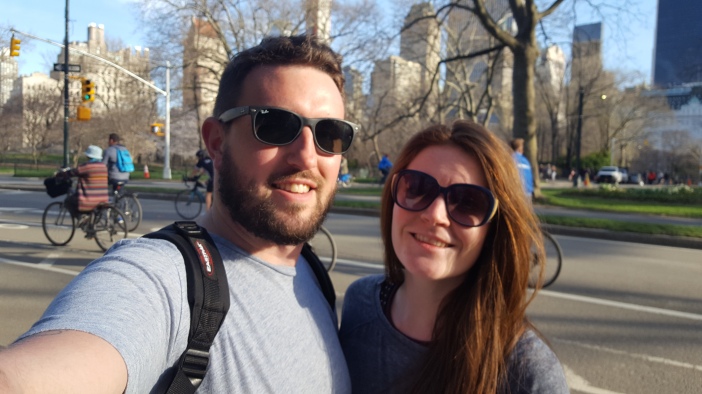 I can’t believe all the cool stuff I have managed to fit in so far and I still have a few crackers to go. Next weekend we head back to PNC park to see the Pirates take on the Yankees and the weekend after myself and Mabel head up north to Toronto to see my main man Henry! Keep it locked, plenty more to come.

What I am reading: Skagboys – by Irvine Welsh.

What I am listening to – Comeback Kid – Wake the Dead & Young Fathers – Tape One.

I decided to do this for friends, family, Uni and work mates. surprisingly enjoying to write. Hope you enjoy reading it. Twitter : @starkedinburgh